Kabuki is a traditional Japanese Theatre. It is the most popular for it's drama, which contains singing, and dancing performed in a highly stylized manner. "A rich blend of music, dance, mime, and spectacular staging and costuming, it has been a major theatrical form in Japan for almost four centuries" (Kabuki | Japanese Arts). Kabuki is known for its unusual and shocking character of this art form. "In modern Japanese, the word is written with three characters: ka, signifying “song or music”; bu, “dance”; and ki, “skill or craft" (Kabuki | Japanese Arts). Kabuki is one of the Japanese traditions that is used for entertainment. This theatre is for everyone to attend unlike the other Japanese theaters. Kabuki is mainly known for its unique and extreme makeup that described each character's personality. Red symbolizes strength and a sense of justice, blue means evil, and brown is used to represent supernatural beings.


The Kabuki theatre was established in the early 17th century, when a female dancer named Okuni, who had been an attendant at the Grand Shrine of Izumo, achieved popularity with parodies of Buddhist prayers. She assembled a group of female performers who danced and acted around her. "Okuni’s Kabuki was the first dramatic entertainment of any importance that was designed for the tastes of the common people in Japan" (Kabuki | Japanese Arts). The pleasing character of the dances and the prostitution of the actors proved to be too disruptive for the government. This led to women being banned from performing in 1629.  In 1652, young boys dressed as women to perform the programs, but this type of Kabuki was suppressed in 1652, again because of concern for morals. Finally, older men took over the roles, and it is this form of the all-male entertainment that is practiced today. "These performances were called Kabuti, whose original meaning is 'tilted' or 'off-killer'"(Felner 130). Kabuki plays grew in sophistication, and the acting became more subtle.

Interaction with the Audience


Traditionally, there is constant interplay between the actors and the audience in the Kabuki theatre. The actors frequently interrupted the play to address the crowd. The audience responded to the closing of the play with the appropriate praise or clapped their hands. They also could call out the names of their favorite actors in the performance. The audience may also give gifts to their preferred actor as praise. 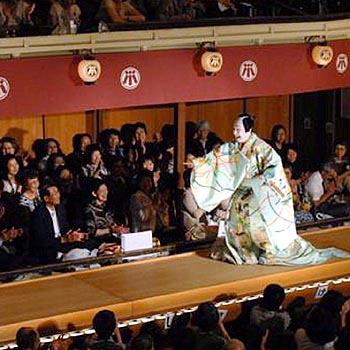 
This video will show the Kabuki traditions and how it is performed. It will also explain the costumes, props and what they represent.

Mime Theatre is a performance done by acting and no words. The actor’s movement primarily means telling a story and not a script. The term “minic” usually evokes images of a story acted out with out words. The body movements by the actor are shown through symbolic and realistic gestures. This type of theatre performance is mainly for entertainment and is known as “silent comedy”. The actor often portrays the story in a ridiculous manner for entertainment. The actor conjures up the existence of unseen objects and people on stage. The actor’s/actress’ appearance is traditionally seen as wearing tight black and white clothing with white facial makeup. However, contemporary mimes often perform without whiteface and wearing other colors such as red. Similarly, while traditional mimes have been completely silent, contemporary mimes, while refraining from speaking, sometimes employ vocal sounds when they perform.

https://www.youtube.com/watch?v=zl-BL0TdDX4
The actor in this mime performance is illustrating a typical day without using any words.

Snapshot of the Mime/Pantomime History
Mime is also called pantomime, which is the art of using movement. The Greek word "pantomimus" which translates to "imitating all" was a highly regarded form of solo dancing often accompanied by music, which encompassed comedy and tragedy and facial expressions rather than primarily the spoken word to communicate. Its popularity was also widespread amongst the Romans until the Christian church prohibited it's public display. “The first recorded mime was Telestēs in the play Seven Against Thebes by Aeschylus who was an ancient Greek tragedian. Tragic mime was developed by Puladēs of Kilikia; comic mime was developed by Bathullos of Alexandria.” The word pantomime has been used to refer to an individual as well as an actual production or performance.

https://jeckorico.files.wordpress.com/2011/03/theater2.jpeg
This image shows a tradition mime actor. He is wearing a black and white striped shirt and his face is painted white. Also the tear drops painted on his face shows the emotion that he is portraying.